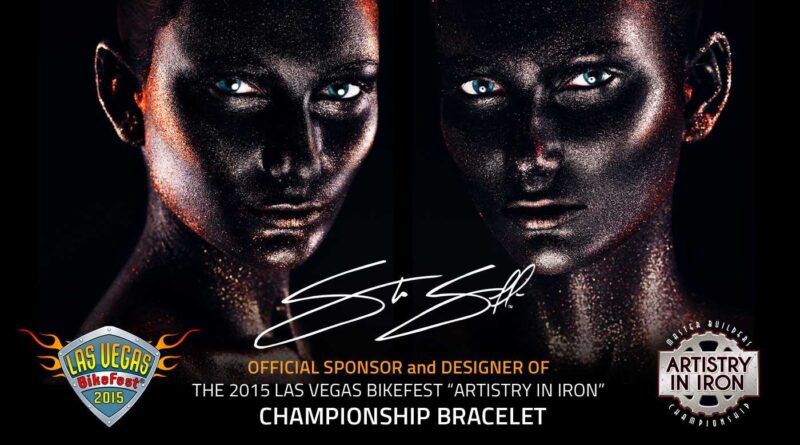 Las Vegas, NV (August 28, 2015) – It’s the dream of all master bike builders; being recognized as the best in your class. The appeal of winning has now been elevated, as Las Vegas BikeFest 2015 returns with the championship bracelet and inks the builder’s name into the history books. To commemorate the 15th anniversary of BikeFest (2001-2015), a new design for the bracelet will be revealed, and awarded to the winner – and for the second year, the “Artistry in Iron” champion will be crowned like a king.

Master Artisan Steve Soffa, designer and creator of the 2010 World Series of Poker bracelets, forged a long term relationship with the team that runs BikeFest, and became the Official Championship bracelet designer for BikeFest 2014 “Artistry in Iron.” With that title comes the responsibility to create a timeless bracelet to be awarded to the Champion each year.
Soffa says, “2015 is extra special as it marks the first year of a new location for this iconic event; DOWNTOWN LAS VEGAS. Being located on the world-famous Fremont Street will be incredible and I will have an entire new set up inside the new pavilion where all the incredible custom bikes will be showcased.

“It’s a tremendous honor to be awarded with creating the foremost trophy for bike-building artists,” continues Soffa. “I have been hard at work putting a new twist on this year’s ‘Artistry in Iron’ Championship bracelet and look forward to unveiling it for public viewing at BikeFest in the new “Artistry in Iron” pavilion.

In addition, Soffa will be on hand at the bracelet ceremony and will also hand-engrave the 2015 Champion’s name into the back of the bracelet.
“It’s an honor to work with a designer of Steve’s caliber,” said BikeFest’s Event Manager, Mindi Cherry. “He’s passionate about the motorcycle industry, an expert in his craft, and we’re confident the Championship bracelet he is crafting will elevate the prestige for anyone fortunate enough to win one.”

The bracelet will be presented to the winner on Saturday, Oct. 3rd at 6:00 pm, inside the Pavilion.

During the design and creation of this bracelet, Soffa has taken great measures to ensure its wearability as well. Soffa spent considerable hours on the faceplate portion of the bracelet, which is crafted in Sterling Silver and features a collection of round cut white diamonds and other precious stones. The “Artistry in Iron” emblem is raised in three dimensions to outline the details. “Unique characteristics like these make this Championship bracelet truly priceless,” says designer Soffa.

In 2005, Soffa launched his first timepiece collection at the Laughlin River Run bike rally. Since then, his dynamic artistry in time and fine jewelry has taken the bike industry by storm and has received Gold awards from JCK and PPAI for his technical designs and innovation. He is a featured designer in Sturgis at EasyRiders Saloon and at One Eyed Jack’s Saloon, as well as Barrett-Jackson car collector’s auction.

In 2008, Soffa opened up his watch and art store in the Rio Hotel and Casino and decorated the entire poker room with his artwork and timepieces. In 2009, Joe Cada and Soffa created a relationship and before the November final table Joe chose to wear Soffa’s award winning timepiece named “Suicide King”. Joe won the 2009 WSOP Main Event wearing the limited edition “King”, which eventually became the official watch of the 2010 WSOP.

As an artist and jewelry designer, Soffa’s collections include a wide range of jewelry pieces, from rings to watches to necklaces, as well as artwork and clothing depicting his unique award-winning style.

In 2010, Steve Soffa created a high-end lifestyle brand for the poker industry. Soffa is recognized as the official jeweler of the World Series of Poker. Soffa is a former Fortune 100 designer who has worked with distributors around the globe to help corporations with their marketing campaigns, and to create brand awareness for their products and services.

Soffa has created timepieces for companies such as Oracle, Microsoft, Sony and Universal Pictures, among many others. In 1996, Soffa created an application called “Virtual Sample” which enabled the industry to create a custom timepiece online within 24 hours. In 2009, Soffa’s Hardcore Watch line and Artistry in Time line was recognized as the official watch of the biker industry and featured in Hot Bike magazine. In 2008, Soffa captured the JCK Award for best watch design, and later that year Soffa opened up his store in the Rio Hotel and Casino. For more on Steve Soffa, visit www.stevesoffa.com.

Las Vegas BikeFest features its new location in historical downtown Las Vegas located on Freemont St. and 8th. The new pavilion will feature new watch and jewelry designs by Steve Soffa and all of the Artistry in Iron custom bikes and its builders. In addition, the rally includes non-stop musical entertainment including headliners Slaughter and Vixon and Paul Rodgers; celebrity appearances by cast members of Sons of Anarchy, and so much more; contests and activities throughout the weekend.

Las Vegas BikeFest 2015 will be held October 1-4, 2015 in Downtown Las Vegas, NV, as well as holding registration in the Grand Ballroom at the hotel headquarters, the Golden Nugget Hotel & Casino, on the world-famous Fremont Street Experience. More information regarding vendor space or event registration can be found at www.LasVegasBikeFest.com, or by calling 1-866-BIKEFEST (1-866-245-3337).